Rue Morgue has published an announcement for our MASSACRE AT CENTRAL HIGH Limited Edition Steelbook! It’s available NOW. Here is the text from their announcement:

The 1976 cult favorite has made its disc debut with all-new special features (including a couple by one of the RUE MORGUE team), and you’ll want to act fast to grab it.

Synapse Films announced this morning that its limited-edition Steelbook two-disc release (Blu-ray and DVD) of MASSACRE AT CENTRAL HIGH is now available at its own website http://www.synapse-films.com and DiabolikDVD:  https://www.diabolikdvd.com/product/massacre-at-central-high-synapse-steelbook-2-disc-dvd-blu-ray-all-region/ Written and directed by Renee Daalder, it stars Derrel Maury, Andrew Stevens (THE FURY), Robert Carradine (ORCA), Kimberly Beck (FRIDAY THE 13TH: THE FINAL CHAPTER) and Cheryl “Rainbeaux” Smith (LEMORA: A CHILD’S TALE OF THE SUPERNATURAL). The synopsis: “When new student David [Maury] arrives at Central High, he discovers that it is lorded over by a gang of bullies who rule the school through intimidation and violence. David’s friend Mark [Stevens] encourages him to join this dominant clique, but instead David stands up for their victims, and the gang cripples him in retaliation. Soon David begins taking steps to end their reign of terror permanently, setting in motion an explosive cycle of killing that may not end until no one is left to graduate!”

Synapse is producing 4,000 units of this special edition, though not all are available at this moment, as Synapse’s Don May Jr. explains: “Our initial plan was to put up all 4,000 immediately, but shipping issues caused us to only get a limited number of these to sell right now. So we have an extremely limited number available for shipping today from both Synapse Films and DiabolikDVD. It’s just an unlucky circumstance, but we couldn’t let the partial shipment hinder our plans for release. We expect the remaining pieces in, of course, but if you want to make sure you have one for yourself, or for someone as a gift for the holidays, my suggestion would be to order it ASAP. As soon as we sell out of our initial allotment, the ordering will go into pre-order status until the rest of the Steelbooks come in, which could be after the holidays.”

Previously available only on VHS, the  movie is presented in a 1.78:1 widescreen, 1080p high-definition remaster scanned, transferred and supervised by Daalder, accompanied by the following bonus features: 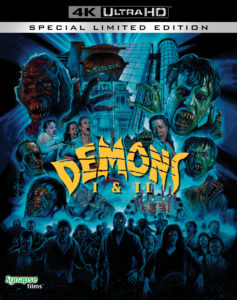