One of the biggest selling titles in Synapse Films’ history is finally coming to Blu-ray!

Growing up mute after a childhood sexual assault, a young girl (Christina Lindberg) spends years working on a remote farm. After missing the bus one day, she is picked up by a suave young man who takes her out to dinner, drugs her and forces her into a life of prostitution.

Torn away from home, she rebels against her captor, only to have one of her eyes gouged out as punishment. After learning of the death of her parents, she secretly trains herself in martial arts, defensive driving and gun use! Transformed into a one woman killing machine with a sawed-off shotgun, she uses her new skills to enact bloody revenge on those who’ve done her wrong.

Synapse Films is proud to present the uncensored version of THRILLER: A CRUEL PICTURE on Blu-ray. This cult-classic is widely considered one of the holy grails of pure exploitation cinema, and one that Quentin Tarantino (director of PULP FICTION, RESERVOIR DOGS and ONCE UPON A TIME… IN HOLLYWOOD) calls “the roughest revenge movie ever made!”

Originally released in the U.S. in a heavily truncated version called THEY CALL HER ONE EYE, THRILLER is presented here with over 20 minutes of restored footage deemed too graphic for 1970s general audiences.

THRILLER: A CRUEL PICTURE contains scenes including strong sexual content, nudity, graphic violence and drug addiction. For sale to persons 18 years of age or older only! 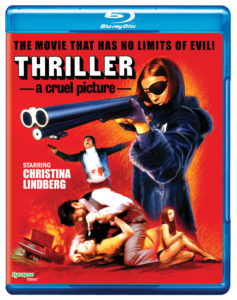