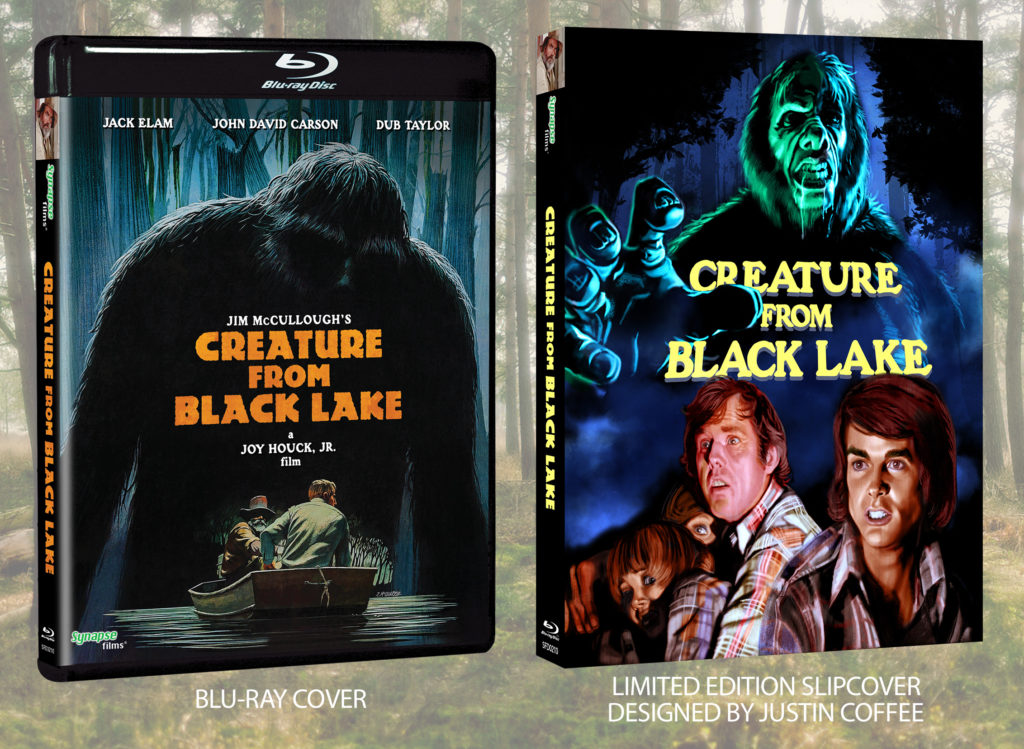 A CULT CLASSIC SURPRISE TITLE FROM SYNAPSE FILMS! AVAILABLE NOW FOR SHIPPING THE WEEK OF AUGUST 21st! GET CREATURE FROM BLACK LAKE WITH A LIMITED-EDITION SLIPCOVER ONLY FROM SYNAPSE FILMS AND DIABOLIKDVD! LIMITED TO 2500 SLIPCOVERS ONLY. ONCE THE SLIPCOVERS ARE GONE, THEY’RE GONE!

“A wonderfully old-fashioned monster movie like they used to make monster movies—chills, chuckles and a couple of good screams.”

There’s a hairy humanoid beast lurking in the Louisiana swamps, but only trapper Joe Canton (Jack Elam, ONCE UPON A TIME IN THE WEST) has seen it and lived to tell the tale, and the other residents of Oil City, Louisiana don’t talk about it. But that’s not about to stop intrepid grad students Pahoo (Dennis Fimple, HOUSE OF 1000 CORPSES) and Rives (John David Carson, EMPIRE OF THE ANTS), who are determined to track down the Bigfoot-like creature. Defying local sheriff Billy Carter (Bill Thurman, THE LAST PICTURE SHOW), the duo trek deep into the wilds of Black Lake, and a series of frightening encounters make it clear the monster is no mere legend.

Following in the (big) footsteps of THE LEGEND OF BOGGY CREEK and similar docudramas, 1976’s CREATURE FROM BLACK LAKE is a fictional Sasquatch saga, albeit one inspired by real reports. With a colorful cast, also including Dub Taylor (THE WILD BUNCH), and plenty of rural atmosphere courtesy of cinematographer Dean Cundey (HALLOWEEN, JURASSIC PARK), scripter Jim McCullough Jr.—who also co-stars—and director Joy Houck Jr. bring touches of humor and humanity that complement the mystery of the monster, and the terror of its attacks. A longtime late-night TV favorite, CREATURE FROM BLACK LAKE now roars onto its Blu-ray debut with a new 4K restoration and a boatload of special features!